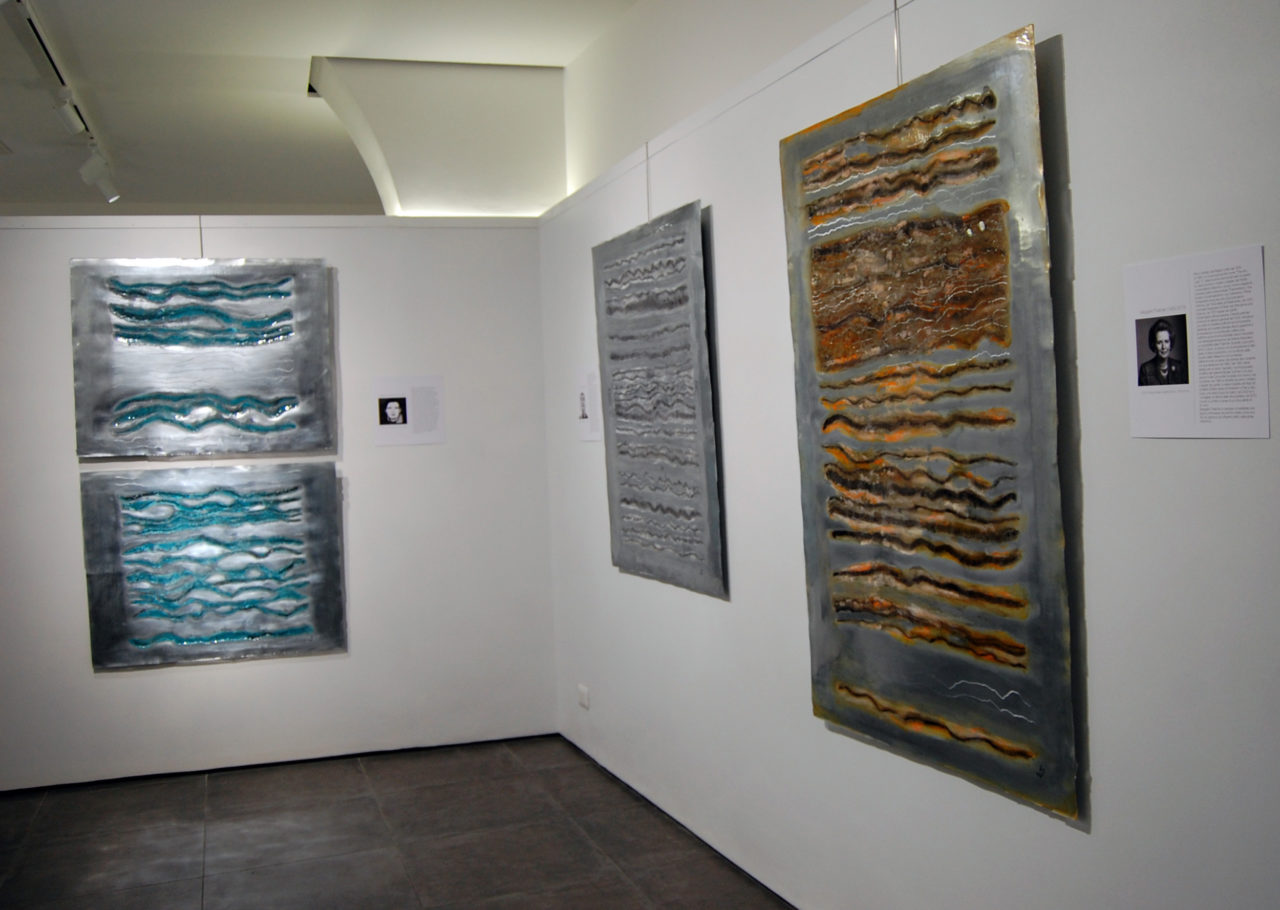 In this sequence of works, Micaela Legnaioli does not describe the lives of the eleven famous women who are the protagonists of the exhibition, nor does she want to indicate, through the images she herself elaborated, a specific quality, perhaps just the one that made them famous, loved, respected, and often even idolized in their careers.

What unites the characters of the exhibition is simply the letter M with which they begin their names.

Yet, despite this somewhat Dadaist idea of laying the foundations of an artistic work like this, the assumption of the exhibition is very serious and thoughtful, even if expressed with aerial lightness and wit.

In the artist’s intention, the zinc plates sculpted and oxidized with acids that make up all the works of the exhibition, want to give an idea of the spiritual, cultural and moral stratification deposited in each of us because of the events of life and experiences. This stratification, which can be perceived by direct observation of the works, takes on an emblematic appearance in the eleven figures, like a sort of backwards DNA. In the sense that DNA is a structure that can be reconstructed in detail, also through images, that is born with us and determines our whole being as an imprint from which it is impossible to free ourselves and that contains within itself the soul and body of the living being.

The stratifications of Legnaioli, on the other hand, are the result of this original imprint, that is, they are the synthesis, in the image of course, of everything that comes after the individual and that determines his destiny and many of his peculiar characteristics, but above all it consolidates the main acquisitions that each of us experiences in life.

Almost as if the author had taken his cue from a natural fact. And, after all, she herself explained what this natural fact is for her. It is the stratification of the rocks that takes the form of irregular drawings but still guided by an iron and incontrovertible logic of development. And that natural datum becomes, in the image of Legnaioli, pure abstraction of waves of energy that shape the space in a manner consistent with that which characterized the lives of the great women chosen.

Each one is a symbol. Symbol of art, science, politics.

In any case, the works in the exhibition make series, and very tight series. As if to say that, despite the enormous differences that separate one character from another, there is a common root for those exemplary lives and that root is the art itself that brings order, harmony, balance in what may seem to be the maximum of disorder and chaos of life itself in all its articulations.

And so, these plates constitute a sort of encyclopaedia of secular knowledge and each of us can and must measure ourselves against the images, very abstract and mysterious at least at first glance, which speak to us instead of famous personalities, almost as if to uncover this strange DNA of return that is represented, precisely, in the fervid and pulsating images elaborated by Micaela.

On April 11th, Galleria Fidia opens the exhibition Eleven Lives by Micaela Legnaioli; eleven material works that trace the lives of eleven excellent women. The gallery confirms its path of contemporary artistic research, combining it with its historical vocation of presenting established artists.

The exhibition presents the artist’s new series on metal, in which zinc plates sculpted and oxidized with the use of acids are dedicated to the experiences of eleven women, united not only by the role of crucial importance played in the history of the West, but also by the initial of their name, the letter M.

The works, whose two-dimensionality is a deviation from the artist’s path marked by realizations of sculptural value, recall the phenomenon of the formation of rocks. The irregular drawing generated by the sedimentation of rocky layers, the result of the mutations of matter caused by natural events, are transferred to the metal in the form of engraved furrows: visible traces of the positive and negative events, public and private, experienced by the eleven protagonists.

In the text presenting the exhibition, Claudio Strinati writes: “This stratification, which can be perceived by direct observation of the works, takes on an emblematic aspect in the eleven figures, like a sort of reverse DNA. And that natural datum becomes, in the image of Legnaioli, pure abstraction of waves of energy that shape the space in a manner consistent with that which characterized the lives of the great women chosen. […]”.

The traced signs faithfully follow the existence of these women, and their depth varies according to the impact that events and experiences have had in individual life paths. The artist thus proposes real maps of individual parables, determined by will, chance and the environment. The visual impact and meaning of the works, despite their unquestionable expressive force, are not revealed to the observer until after a thorough investigation, and through a more conscious reading we arrive, therefore, at the clear deciphering of an otherwise impenetrable abstraction.

The fascination of these works is exalted by the brightness of the metal support and by the chromatic variation, in intimate dialogue with the experience of the single characters.  Micaela Legnaioli proposes a new visual rewriting of the biography of female icons belonging to different historical contexts and eras. The eleven women chosen have struggled to emerge and to make a contribution to history, albeit with controversial results: loved, hated or forgotten have all left an indelible mark of their passage.